With its extendable track width, dual drive speed, hydraulic basket levelling and no electronic limiter, the T200 is known for its easier use: ideal for novice users and hire companies.
Both the extension cylinder and the electrical and hydraulic systems are inside the arm, protected from weathering and debris. The electrical system and catenary are housed inside the arm, protected from the risk of getting caught up with other elements during operation.

The design of this platform has been studied extensively, to enable access and transit even in confined spaces thanks to its extreme compactness. The jib allows easy access to hard working access areas that require a negative work angle.

Platform Sales have an extensive after-sales service network throughout Australia to support you when you need it most.

Our highly trained and qualified service engineers can provide the expertise required to keep any make or model machine, in the best working order for consistently safe and efficient performance. 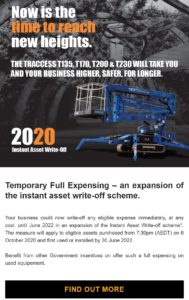